The Bible's second verse speaks of this, when the earth was without form, and void, and darkness was on the face of the waters. The Hebrew word for 'without form' is tohu, which literally means chaos. One more step was necessary, though, before the creation of the lower worlds could proceed. The prospect that these lower worlds would receive a continuous supply of divine light ran counter to another goal of Creation, which was that man should have free will. As the Ari explains "were God’s infinite light always manifest, man would not have free will". If a person were always aware of God’s presence, transgressing His will would be impossible. God therefore concealed His light, and in so doing allowed man to choose freely between doing good and doing evil.

To this end, God formed ten sefirot to act as channels or filters to convey light. The sefirot are ten attributes through which God manifests Himself. The sefirot are not God, but they are the medium through which specific qualities and attributes can be ascribed to Him. These ten sefirot were necessary tools in His plan, for without them, God’s infinite light would have overwhelmed and obliterated worlds and creatures that were placed at lower levels of holiness and spirituality. 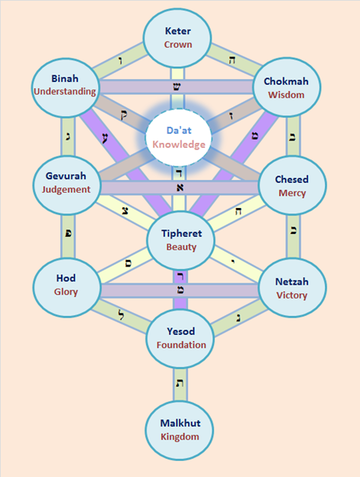 The re-design of the ten sefirot into an organized structure.

Isaac Luria teaches that there are 288 fallen sparks. This is derived from the line in Genesis 1:2, "and the Spirit of God moved upon (merachefet) the face of the waters."

"And the earth was without form (תהו  tohu), and void; and darkness was upon the face of the deep. And the spirit of God ﻿moved upon﻿ (מרחפת  merachefet) the face of  the waters."  Gen 1:2

The Hebrew word merachefet, or "moved upon" (מרחפת) is the eighteenth word in the Torah, and with a gematria value of 728 is the first word that's a multiple of 26, which is the gematria value of the Tetragrammaton (יהוה). The Ari explains that the word "merachefet" is actually a compound of two words: "met" and "rachaph" - the first and last letters  - מ ת - spell met ("death"); the remaining letters - ר ח פ  -spell rachaph ("move") which has a gematria value of 288. This is also the value of the word ibbur (ע י ב ו ר) which means "gestation". So, death and rebirth are all represented in the opening to Genesis, signifying that 288 fragments ("rachaph") had died ("met") - an allusion to the shattering of the vessels of tohu into 288 initial sparks.


The number 288 also figures prominently in Pythagorean geometry. This can be seen by comparing the first two primitive Pythagorean triples:

The two 3:4:5 Pythagorean triangles featuring the isopsephia of Jesus also reveal the number 288:

A 3:4:5 Pythagorean triangle featuring a side length of 288 is of particular interest, revealing an abundance of familiar biblical gematria numbers:

Notice how each side of this triangle reduces to 9:


That 288 is the totient function of 888 (the isopsephia value of Jesus) leads us to another Pythagorean triangle that features those two numbers:

The Rose Of Venus

The orbital path of Venus  as we see it from Earth (geocentric) traces a spirograph pattern that takes 8 years to complete. One orbit around the sun takes the Earth 365.2 days, and Venus 224.7 days. This gives a ratio of 13 to 8, two consecutive Fibonacci numbers whose division gives an approximation of the golden ratio. The difference between 13 and 8 explains the five-fold symmetry of the geocentric orbit of Venus. This pattern is sometimes called the Rose of Venus, and a perfect pentagram can be superimposed at its center. The dance of the planets to the music of the spheres. Beauty abounds!
The planet Venus forms a pentagram in the night sky every eight years, returning to its original point every 40 years with a 40 day regression.
Pentagram comes from the Greek word pentagrammon, meaning five lines. It was an important symbol to the Pythagoreans, and the angles formed by the five lines mirror the numbers from the Pythagorean triangle above. The line segments are proportionate to the golden ratio.
The pentagram is also often seen in nature:

Still on the Pythagorean connection, there is another series of triangles featuring number 288. This series also has the number 153 (fishes) and the aptly named vesica piscis.

The term "vesica piscis," meaning "fish bladder" in Latin, is used for the particular symmetric lens formed by the intersection of two equal circles whose centers are offset by a distance equal to the circle radii. The proportions of this lens is given as 1:√3 or approximately 153:265 (no better approximation can be obtained with smaller whole numbers).
Others have similarly adapted this symbol to disprove exclusive ownership rights:

It is interesting that when Jesus instigated the catch of 153 fish, he instructed that the catch should be from the right side of the boat (indicating Chesed, or the right arm of God).

"And he said unto them, Cast the net on the right side of the ship, and ye shall find. They cast therefore, and now they were not able to draw it for the multitude of fishes."  John 21:6

210 is a significant Bible number, being the years of the Israelites' sojourn in Egypt. Thus, when Jacob tells his sons to "get you down" (this phrase in Hebrew רדו has a gematria value of 210) and purchase grain in Egypt to stave off the famine (Gen. 42:2), this is interpreted to mean that Israel's sojourn there will last 210 years (timeline here).

A fractal is an object or quantity that displays a pattern of self-similarity on all scales. The term ‘fractal’ was originally coined by Benoît Mandelbrot in 1975, from the Latin fractus which means fractured or broken. Fractals are interesting because as you zoom in closer, the pattern is just as beautiful and complex as when you start. They are both very simple and infinitely complex at the same time. Many scientists believe that they may be useful as a way of predicting apparently unpredictable or random things. A fractal constructed from a pentagon is called a pentaflake.
Despite being a relatively recent area of scientific study, fractals have always existed in nature as the following image gallery will attest: