The Land Of Israel

The phrase "the land of Israel" is in Hebrew ארץ ישראל (Eretz Yisrael) which has a gematria value of 832. The first occurrence of 832 in pi begins from position 26:

As had Moses at Horeb (Deu 5:3) and Jesus in the Temple (Mat 22:31-32), Isaiah was here emphasizing that God's covenant was made with the living and not with the dead, thereby bringing the revelation into the here and now.

The first occurrence of 213 in pi is followed by the four digits 3936, which is the gematria value of Moses' declaration to the living at Horeb: 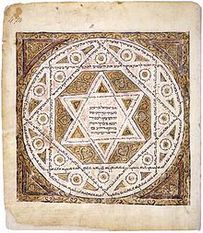 Cover page of the Leningrad Codex: the oldest complete copy of the Hebrew Bible. c.1008 CE.

"And Isaac loved Esau" (ויאהב יצחק את עשו) from Gen 25:28 has a gematria value of 1009. When he realized his favored position had been usurped by Jacob, Esau pleaded with Isaac, "Bless me, even me also, O my father" (ברכני גם אני אבי) see Gen 27:38


The first occurrence of 169 in pi is followed by the three digits 399:

The first occurrence of 169 in e begins from position 399: 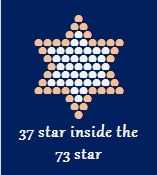 Jacob was blessed by his adversary at the breaking of the day, and his name changed to Israel, which means God (El) prevails.


The first occurrence of 376 in pi is followed by the three digits 213:

God divided the light from the darkness on the first day of Creation (Gen 1:4), as the gematria attests:
The first eleven star numbers sum to 2651.

With his power diminishing with the darkness, the adversary said. Let me go, for the day breaketh (Gen 32:26). To which Jacob replied, I will not let thee go, except thou bless me. Jacob was blessed, and his name was changed from Jacob ("supplanter)" to Israel ("a prince with God").

"UNTIL THE BREAKING OF THE DAY: this being the moment when his dominion passed away and vanished. The same will happen in the time to come." Vayishlah 170a.

The year 5778 on the Hebrew calendar coincides with 2017/2018 on the Gregorian calendar. Portentously, it is also the surface temperature of the sun (degrees Kelvin). In between these second and third occurrences of 5778 in pi are the two digits 18, the gematria of the Hebrew word (Chai) meaning "life" or translated as "the living" in Isa 38:19 (see above).

According to Revelation, in the time to come Satan will be bound for a thousand years, and cast into the bottomless pit where he can no longer deceive the nations (Rev 20:1-3).

Jacob died in the year 2255 on the Hebrew calendar, and the first occurrence of 2255 in pi is preceded by the four digits 8883.

This is the second occurrence of 8883 in pi. The first occurrence is preceded by the four digits 2220, which is the numerical value of "John the Baptist" (Ιωαννης βαπτιστης).


2662 is the gematria value of the verse which marks the halfway point of the Bible.

"Jacob" (יעקב) became "Israel" (ישראל) after wrestling with the angel, with a corresponding difference of 359 in gematria value. The "supplanter" became "a prince with God (El)". El (אל) has a gematria of 31, which is the eleventh prime number.


So riddle me this:

The 25th Hebrew word in the Bible is אור ("light") when, on the first day of Creation, God said, Let there be light (Gen 1:3). And there was light.

As if for emphasis, the first occurrence of 427 in e is followed by the three digits 427. The preceding four digits are 5166:

The etymology of Israel is not certain, but is likely "God (El) rules" or "God (El) prevails". The gematria value of אל (El) is 31, which is the eleventh prime number. Jacob had eleven sons at the time he was renamed Israel. The number eleven is also prime, and therefore its totient value is ten. this introduces an intriguing investigation comparing number values in bases 10 (decimal) and 11 in relation to Torah, Israel and the Messiah.

The first occurrence of 452 in pi begins from position 611:

The first occurrence of 506 in pi begins from position 1115. The preceding three digits are 541 (Israel):

CASE 4: THE BLOOD OF THE COVENANT AND THE MESSIAH

In the New Testament (KJV), the term "the blood of the covenant" appears only once (Heb 10:29) where in the original Greek it is spelled αιμα της διαθηκης which has a numerical value of 820.

The first occurrence of 932 in pi is followed by the three digits 384:

Parable of The Pounds

The gematria value of ישראל ("Israel") is 541. Beginning from position 541 in pi are the five digits 19070, which in the King James Version of the Bible is the number of a verse from the prophet Jeremiah.

Beginning from position 1590 in pi are the three digits 777: 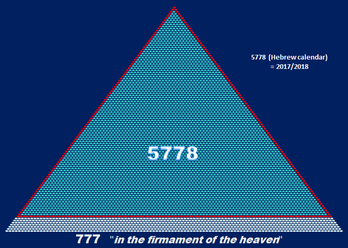