The Sun of Righteousness

In the last chapter of the Old Testament, the book of Malachi contains an allusion to the Sun of righteousness, even referring to this "Sun" as a person. The context clearly shows that Sun of righteousness is another name for the Messiah, who will usher in the Day of the Lord and subsequent healing of all things.

The numerical value of Ιωαννης βαπτιστης ("John the Baptist") is also 2220:

As was foretold by Malachi (see Mal 3:1 cf Mar 1:2), John the Baptist prepared the way for the coming of the Sun of righteousness, when he said:

Malachi referred to the Messiah as "the Sun of righteousness".


The following three digits are 800.


The first occurrence of 888 in phi (the golden ratio) is preceded by the three digits 640:

Let There Be Light 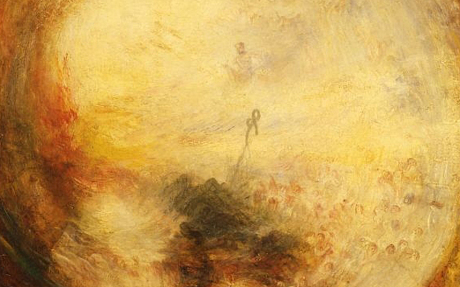 Light and Colour (Goethe's Theory) - After the Deluge - Moses Writing the Book of Genesis by J M W Turner. Exhibited 1843 (detail). Turner is known as "the painter of Light". To him, light was the emanation of God's spirit and this became the focus of his later work.
On the first day of creation, God said, Let there be light: and there was light. Yet the sun and the moon were not created until the fourth day. The light of the first three days is of a different order to what we know.


The first occurrence of 159 in pi begins from position 3:

The following two digits are 26, which is the gematria value of יהוה (YHWH). God said, Let there be light in the Bible's third verse:


The first occurrence of 813 in e begins from position 159, and is followed by the three digits 232:

The primordial light existed for the first three days of creation, which were described in the first 159 words of the Hebrew Bible. The first occurrence of 813 in pi is preceded by the three digits 159:

A midrash teaches that this primordial light (also see Isa 30:26) has since been hidden away, for the benefit of the righteous in the world to come (b. Hag. 12a). This hidden light, and the promise of it's return, is also spoken of in the Book of Job:

"And now men see not the bright light which is in the clouds; but the wind passeth, and cleanseth them."  Job 37:21 KJV

The meaning of this verse is perhaps better understood in the JPS translation:

"Now, then, one cannot see the sun,
Though it be bright in the heavens,
Until the wind comes and clears them [of clouds]."

The Hebrew word for "wind" is רוח (ruach), which is the same word translated as "spirit" (as it is in Genesis 1:2) Strongs H7307. As was the "spirit" that moved upon the waters, the "wind" that comes and clears the clouds is a clear reference to the Messiah.


The purpose of the ministry of John the Baptist was to bear witness of the Light:

"There was a man sent from God, whose name was John. The same came for a witness , to bear witness of the Light, that all men through him might believe. He was not that Light, but was sent to bear witness of that Light. That was the true Light, which lighteth every man that cometh into the world."  John 1:6-9
"And he made the mercy seat of pure gold: two cubits and a half was the length thereof, and one cubit and a half the breadth thereof."  Exo 37:6

"And he shall bring forth thy righteousness as the light, and thy judgment as the noonday."  Psa 37:6


"Here is wisdom. Let him that hath understanding count the number of the beast: for it is the number of a man; and his number is  Six hundred threescore and six." ﻿ Rev 13:18

"How much better is it to get wisdom than gold! and to get understanding rather to be chosen than silver!"  Pro 16:16


"The f﻿﻿ear of th﻿﻿e LORD is the beginning of wisdom: a good understanding have all they that do his commandments: his praise endureth for ever."  Psa 111:10
The gematria confirms that the Messiah is the Light that existed at the beginning of creation; and a further allusion to the rising Sun of righteousness appears in the Book of Isaiah:

קוםי אורי ("Arise, shine") has a gematria value of 373, the same as the Greek isopsephia for λογος ("Word") referred to in the first verse of John's Gospel.

The scriptures proclaim that the Messiah will bring forth truth and justice. He will judge not by what he sees or hears, but with righteousness.

"In those days, and at that time, will I cause the Branch of righteousness to grow up unto David; and he shall execute judgment and righteousness in the land."  Jer 33:15

"...he shall not judge after the sight of his eyes, neither reprove after the hearing of his ears: But with righteousness shall he judge the poor, and reprove with equity for the meek of the earth…"  Isa 11:3-4

"The heavens declare his righteousness, and all the people see his glory."  Psa 97.6

"In those days shall Judah be saved, and Jerusalem shall dwell safely: and this is the name wherewith she shall be called, the LORD our righteousness."  Jer 33:16
The number 276 is familiar from Acts 27:37, where 276 souls were saved from a shipwreck off the coast of Malta. The connection between water and spirituality is ever present in the Bible, right from the dawn of creation when "the Spirit of God moved upon the face of the waters". The Hebrew words for "the heaven" are (השמים HaShamayim) and "the water" (המימ HaMayim) serve to emphasize the connection.


The Hebrew spelling of water is usually מימ, but there is one instance (Exo 7:19) where it is spelled with an extra yud מימי. There is a mystery in the Bible where certain words are written with an extra yud, starting with the Genesis account of the creation of man. In Genesis 2:7, God formed man from both earthly (dust of the ground) and spiritual (breath of life) matter. This spiritual dimension is what sets man apart from animal life. As if to emphasize this difference, the word for formed (וייצר) describing the creation of man (Gen 2:7) is spelled with an extra yud. In Genesis 2:19, when God "formed out of the ground" every beast of the field and every bird of the sky, the conventional spelling with a single yud (ויצר) was used. The sages have interpreted this to mean that man was created both for this world, and for the world to come following resurrection. As Rashi explains in his commentary:

Other words that occur with the extra yud are as set out in the following table: 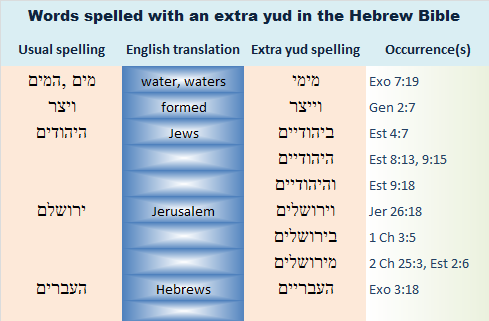 Instances of the appearance of an extra yud in the Hebrew Bible.
Water spelled with the extra yud מימי (mem yud mem yud) is an anagram of seas ימים (yud mem yud mem) and has a gematria value of 100.
"Jesus answered, Verily, verily, I say unto thee, Except a man be born of water and of the Spirit, he cannot enter into the kingdom of God."  John 3:5

Verily (twice for emphasis) is the same Greek (αμην) word translated as "Amen", and has an isopsephia value of 99.


The prophet Isaiah used the waters as a metaphor for the knowledge of God when he said:

"For the earth will be filled with the knowledge of God, as the waters cover the sea."  Isa 11.9

The gematria values in this study can be summarized thus:

The Messiah's proper name, Yeshua, is a contraction of Yehoshua (Joshua) meaning YHVH saves, having a similar root to "Yoshia," meaning "He (God) will save." The Hebrew spelling of Yeshua is ישוע and for "salvation" is ושע, which has a gematria value of 376.

The law is the Torah, which was given at Mt. Sinai in the year 2448 on the Hebrew calendar. Gen 24:48 begins with the phrase "And I bowed down my head, and worshipped the LORD" (ואקד ואשתחוה ליהוה) which has a gematria value of 893. The first occurrence of 893 in pi begins from position 999:

The first occurrence of 999 in pi is followed by the three digits 999:

Nowhere was the role of water in the Bible more dramatically evident than in the story of the flood in the days of Noah. This is important to the present day, as the Gospel of Matthew tells us that similar conditions will prevail prior to the coming of the Son of Man:


After the flood, God assured Noah that never again would the waters cover the earth:


The rainbow is a token of the covenant God made with Noah ("I will set my bow in the clouds..." Gen 9:13) prompting these words from a Negro spiritual, performed in this video by the Carter Family around 1930 (lyrics here).
This section started, and should end with the words of Malachi the prophet:

"For, behold, the day cometh, that shall burn as an oven; and all the proud, yea, and all that do wickedly, shall be stubble: and the day that cometh shall burn them up, saith the LORD of hosts, that it shall leave them neither root nor branch."  Mal 4:1
כי  הנה  היום  בא  בער  כתנור  והיו  כל  זדים  וכל  עשה  רשעה  קש  ולהט  אתם  היום  הבא  אמר  יהוה  צבאות  אשר  לא  יעזב  להם  שרש  וענף

In Hebrew, this verse has 26 words and 86 letters.


As was the case when Joseph was sold into slavery, only to eventually save Israel and the entire Egyptian nation from starvation, God's intention is to bring good out of human evil, and arrange the survival of many people. As Joseph explained to his penitent brothers:

"But as for you, ye thought evil against me; but God meant it unto good, to bring to pass, as it is this day, to save much people alive."  Gen 50:20


The world was created to last for six thousand years - afterwards will be a Sabbatical millennium. Sanhedrin 97a  (also see Revelation 20:1-6).
Home