Happily, Lemaitre was to live long enough (he died in 1966) to witness the discovery of the Cosmic Microwave Background in 1964. This discovery, more than anything else, supported Lemaitre's theory regarding the origin of the universe, and its subsequent expansion .
Despite his dual profession as scientist and priest, Lemaitre considered science and religion to be separate (but not incompatible), with each offering different, parallel interpretations of the world.

“As far as I can see, such a theory remains entirely outside any metaphysical or religious question.”  Georges Lemaitre

Notwithstanding the reservations of Monsigneur Lemaitre, the numbers from the Bible are in accord with the Big Bang theory and particle physics. The signature of God (יהוה), which has a gematria value of 26, is evident throughout the Big Bang narrative. The most obvious observation about the universe is that it's very big, after starting very small.

“The universe is seeming really huge right now. I need something to hold on to.”  E. Lockhart, We Were Liars

“God created… light and dark, heaven and hell -- science claims the same thing as religion, that the Big Bang created
everything in the universe with an opposite. “Including matter itself, antimatter”
― Dan Brown, Angels and Demons
In physics today, one of the most puzzling unsolved problems is "why do we exist?" According to all theories of physics, equal amounts of matter and antimatter were created after the Big Bang. According to this scenario, these should have completely annihilated each other, leaving energy in the form of light, but none of the building blocks for stars, galaxies and us. Somehow, matter prevailed - we know that the universe contains 10⁹ photons for every proton or neutron. These photons, created when matter annihilated with antimatter, are what we see in the cosmic microwave background. So we know that matter prevailed by just one part in a billion! Imagine a poll deciding whether or not we should exist, where every man, woman and child on earth participated. And the verdict is yes, we should exist - by a margin of a mere seven votes. It was that close. This video from Discovery TV describes the prevalence of matter over antimatter.
﻿﻿﻿“I like to say that while antimatter may seem strange, it is strange in the sense that Belgians are strange. They are not really strange; it is just that one rarely meets them." ﻿﻿﻿  ― Lawrence M. Krauss, A Universe from Nothing: Why There Is Something Rather Than Nothing

There has been a great deal of scientific research dedicated to this asymmetry of the early universe. In what has become one of the most quoted papers  in higher physics, Kobayashi and Maskawa (1973) predicted there should be three generations of particles in order for this asymmetry to exist. The subsequent discovery of the charm (1974), bottom (1977) and top (1994) quarks proved their theory, for which they were joint winners of the Nobel Prize in 2008. Their prediction of three generations of particles was necessary to account for the difference between matter and antimatter. Fundamental particles can be considered to be geometric points, and at least three are required to produce a polygon (in the case of three generations - a triangle). Two generations would not be possible, because connecting two points results in a straight line, which would mean no difference between matter and antimatter (a straight line has no opposite reflection). 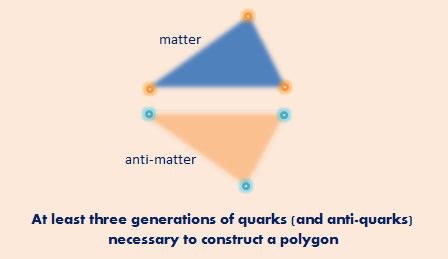 According to this polygonal model, Kobayashi and Maskawa predicted an asymmetry between matter and antimatter. Two recent experiments using particle accelerators by teams of scientists from Stanford/Berkeley and KEK (Japan) have confirmed theses predictions. Some of what is known as the CP violation was accounted for by these experiments - some, but not all.


Another theory being investigated is the possibility that the neutron is not perfectly round, resulting in a slight electric charge imbalance (called the neutron electric dipole moment, or EDM). The neutron is known to be round to better than one part in a trillion.


This limit is insufficiently sensitive to detect an asymmetry between matter and antimatter, and the present goal is to reduce the level of sensitivity to 10⁻²⁸ using ultra cold technology. It seems that the study of quarks cannot explain the entire asymmetry, so experiments are being conducted in both Japan and the USA, exploring the properties of neutrinos and anti-neutrinos. Scientists at Fermilab are planning a long baseline neutrino experiment. The experiment will send high intensity neutrino beams 800 miles through the earth's mantle to a large detector located at South Dakota. Neutrinos only spin left and antineutrinos only spin right. This is different from other fundamental particles of matter, which have both left and right spin counterparts. Given that neutrinos have no electric charge, there is the possibility that left-handed neutrinos and right-handed antineutrinos are actually the same. In other words, matter and antimatter can change into each other which may explain the asymmetry we see in the universe.

"Three quarks for Muster Mark!
Sure he has not got much of a bark
And sure any he has it's all beside the mark."
James Joyce - Finnegan's Wake
Until early in the 20th century, scientists believed that atoms were the fundamental building blocks of matter. Additional experiments  revealed that atoms were made of protons, neutrons and electrons. It was then thought that these were elementary, and this view was held until the 1960s. Experiments hinted that protons and neutrons were composed of even smaller particles. Theoretical physicist Murray Gell-Mann proposed the existence of fundamental particles smaller than protons and neutrons, which he called quarks after a line by James Joyce. This discovery is explained by the man himself (not Muster Mark) in this video:
In the standard model of particle physics, there are three generations each of quarks, electrons and neutrinos. Quarks also come in three colors. Quarks and electrons can exist in either left or right handed states, but there are only left-handed neutrinos and right-handed anti-neutrinos. So there are 45 particles of matter (6 quarks x 3 colors x 2 spin states) + (3 electrons x 2 spin states) + (3 neutrinos), and 45 particles of anti-matter.

The Higgs field, which gives these  particles mass, was proven in 2012 when the Higgs boson was detected, 45 years after first appearing in the physics literature in physicist Stephen Weinberg’s famous paper of 1967 "A Model of Leptons". These dates strangely correlate to the years which boast the longest and shortest mean average day in recorded history. The length of the mean average day is 86,400 seconds, but this can vary slightly due to Earth's dynamic atmosphere. Accurate measurements of these variations have been kept since the year 1700.

In the Bible, the generations of Adam up until the Great Flood can be calculated to accurately estimate the number of seconds in a mean average solar day, and the very day the windows of heaven were opened provides a key number in physics - the neutron-electron mass ratio to 99.99% accuracy. The verses  Genesis 5:3-29 and 7:11 provide the clues. We read that Adam lived 130 years until he fathered Seth; Seth in turn lived 105 years until he fathered Enos, and so on through the generations up to Noah. By simple addition, we calculate that the years from Adam until the birth of Noah were 1056, and that Noah was 600 years of age at the time of the flood. 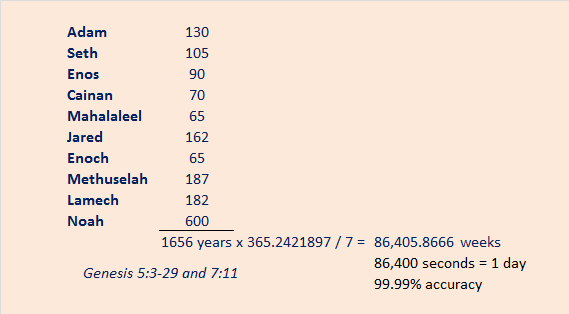 "In the six hundredth year of Noah's life, in the second month, the seventeenth day of the month, the same day were all the fountains of the great deep broken up, and the windows of heaven were opened."﻿﻿ Gen 7:11


In Gen 7:11 we read that the windows of heaven were opened on the 17th day of the 2nd month. Given that the first month on the Hebrew calendar (Nisan) has 30 days, that makes this the 47th day of the year.

The Expansion of The Universe

There is further evidence for a flat universe using geometric measurements from the cosmic microwave background, as explained by astrophysicist Roberto Trotta in this video:
The total mass (baryonic) component of the universe is incredibly small in relation to it's size. Distributed evenly throughout the universe, it equates to about 6 hydrogen atoms per cubic meter. Evenly dispersed, the mass of an average man (85kg or 185 lb) would would fill a volume equivalent to about 6 suns!

The Geometry of Genesis 1:1

Until about 380,000 years after the Big Bang, the universe was filled with a hot soup of unbound particles. As the Universe expanded it started to cool down, allowing electrons and protons to pair up and form hydrogen atoms. This recombination allowed photons of light to travel freely, no longer trapped by constant collisions with the free electrons. These photons are what we see today in images of the cosmic microwave background.
Considering the geometry of the flat universe and the triangular formation of elementary particles, it is interesting to note that 2701 is the 73rd in the series of triangular numbers according to the formula T(n) = n(n + 1)/2. Also worth noting is that 2701 is the sum of 26² and 45².


The cosmic microwave background is the furthest back in time we can directly observe. Before that, there was a thick darkness which light could not penetrate. This is analogous to the thick darkness referenced in the Book of Exodus: