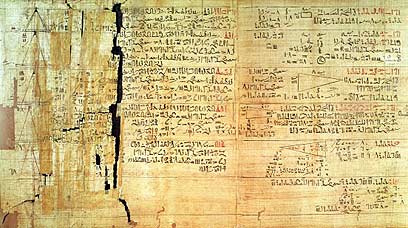 BBC Radio: A History of the World in 100 Objects: The Rhind Mathematical Papyrus
The Hebrew word for "signs" is אות (owth), which is used for the first time in the first chapter of the book of Genesis:

"And God said, L﻿﻿et there be lights in the ﻿﻿firmament of the heaven to divide the day from the night; and let them be for signs, and for seasons, and for days, and years:" Gen 1:14

"They say still unto them that despise me, The LORD hath said, Ye shall have peace; and they say unto every one that walketh after the imagination of his own heart, No evil shall come upon you."  Jer 23:17

It comforts people to believe that prophecies not immediately fulfilled thus lose their potency. We can avoid personal accountability by referring to the precedents - haven't evil people continued to prosper in open defiance of those pesky prophets? In the words of the Preacher, the son of David:

"Because sentence against an evil work is not executed speedily, therefore the heart of the sons of men is fully set in them to do evil. Though a sinner do evil an hundred times, and his days be prolonged, yet surely I know that it shall be well with them that fear God, which fear before him:"  Ecc 8:11-12

The prophet Amos warned against this ephemeral prosperity, false sense of security and detachment from biblical prophecy:

"Hear this word, ye kine of Bashan, that are in the mountain of Samaria, which oppress the poor, which crush the needy, which say to their masters, Bring, and let us drink. The Lord GOD hath sworn by his holiness, that, lo, the days shall come upon you, that he will take you away with hooks, and your posterity with fishhooks ."  Amos 4:1-2

If the words of Ezekiel, Jeremiah and Amos are not sufficiently clear, allow Zephaniah to dispel any doubt about their meaning:

"And it shall come to pass at that time, that I will search Jerusalem with candles, and punish the men that are settled on their lees: that say in their heart, The LORD will not do good, neither will he do evil. Therefore their goods shall become a booty, and their houses a desolation: they shall also build houses, but not inhabit them; and they shall plant vineyards, but not drink the wine thereof. The great day of the LORD is near, it is near, and hasteth greatly, even the voice of the day of the LORD: the mighty man shall cry there bitterly."  Zep 1:12-14


The authors of the New Testament were in total agreement with the prophets - earthly riches are a trap and a snare. And the real false prophets are not those predicting an approaching apocalypse, but those assuring that all is well, and the prophets warnings no longer apply.

"Beware of false prophets, which come to you in sheep's clothing, but inwardly they are ravening wolves." Mat 7:15

Ezekiel followed up his disdain of false prophecy with the following unambiguous words:

"Tell them therefore, Thus saith the Lord GOD; I will make this proverb to cease, and they shall no more use it as a proverb in Israel; but say unto them, The days are at hand, and the effect of every vision. For there shall be no more any vain vision nor flattering divination within the house of Israel. For I am the LORD: I will speak, and the word that I shall speak shall come to pass; it shall be no more prolonged: for in your days, O rebellious house, will I say the word, and will perform it, saith the Lord GOD."  Eze 12:23-25
﻿"Ezekiel Sa﻿﻿w The Wheel" ﻿by the﻿﻿ aptly named The Charioteers.

The sequence of 999999  starting from the 762nd decimal place of pi recalls the word "Amen" which in Greek isopsephia has a value of 99.

The word "amen" means truly (when it appears at the beginning of a discourse), so be it or most significantly "may it be fulfilled". It was transliterated from the Hebrew into the Greek of the New Testament, then into Latin and into English and many other languages, so that it is practically universal and has become the most famous of all Hebrew words. It's Hebrew spelling is  aleph - mem - nun (אמן) which has a gematria value of 91.
In Hebrew, amen (Strong's H0543) comes from the root aman (Strong's H0539), which means "believe".


"And blessed be his glorious name for ever: and let the whole earth be filled with his glory; Amen, and Amen." Psa 72:19

There should be no prizes for guessing which is the last word in the Bible:

"He which testifieth these things saith, Surely I come quickly. Amen. Even so, come, Lord Jesus. The grace of our Lord Jesus Christ be with you all. Amen."   Rev 22:20-21

"Verily, verily, I say unto thee, We speak that we do know, and testify that we have seen; and ye receive not our witness."  John 3:11

In the Olivet Discourse, Jesus stated that following a period of great tribulation, his second coming would be imminent. This prophecy has been the subject of intense speculation ever since, particularly in relation to the timing of events. In the Synoptic Gospels, there are four verses in which Jesus stated that the fulfillment of this prophecy would be in this generation:

"Verily I say unto you, All these things shall come upon this generation."  Mat 23:36

"Verily I say unto you, This generation shall not pass, till all these things be fulfilled."  Mat 24:34

"Verily I say unto you, that this generation shall not pass, till all these things be done."  Mar 13:30

"Verily I say unto you, This generation shall not pass away, till all be fulfilled."  Luk 21:32

Some interpreters believe that Jesus in the Olivet Discourse used this apocalyptic language symbolically, as had many Jewish prophets before him. Others insist the discourse should be read literally, and therein lies the misunderstanding. Idealism, preterism, futurism historicism; how could things get so complicated? Christian apologist and author C. S. Lewis went so far as to call these "the most embarrassing verses in the Bible". Casting aside any attempt at a literal interpretation, let us proceed with caution:


In the Complete Jewish Bible "they also that come after" (האחרונים) is translated as "the last ones" (Strong's H314), which Rashi interpreted as the Generation of Dispersion.


"There is no end of all the people" was interpreted by Rashi as they were fruitful and multiplied too much. He could scarcely have imagined the population explosion subsequent to his lifetime (1040-1105). The growth of world population makes an interesting comparison with a logarithmic graph depicting the increasing accuracy of pi for the same period.
Never mind trying to interpret the Olivet prophecy literally, surely we are the last ones -- the generation which shall not pass till all these things are fulfilled. The Dispersion ended in 1948 (5708 on the Hebrew calendar), when the state of Israel was established in Eretz Yisrael. If a generation indeed be threescore years and ten, that generation does not pass until the year 5778.

"The days of our years are threescore years and ten; and if by reason of strength they be fourscore years, yet is their strength labour and sorrow; for it is soon cut off, and we fly away." Psa 90:10

The Hebrew word translated in the KJV as "cut off" (Strong's H1468)  is גוז (guwz), meaning to "pass over, pass away". As does the book of Ecclesiastes, Psalm 90 (a prayer of Moses, who was born in the year 2368, (the numerical value of "Jesus Christ") contrasts God's eternity with human beings' transience and fragility.

Leaving aside the string of nines, there are only three four-digit numbers that each appear three times within the first 1,000 digits of pi. Those numbers are 5778, 2019 and 8253. The year 5778 on the Hebrew calendar corresponds with 2017-2018 on the Gregorian calendar. 2019 is the year after that. Remarkably, 8253 references a further warning from the Bible against the terrible consequences of believing false prophets:

"But there were false prophets also among the people, even as there shall be false teachers among you, who privily shall bring in damnable heresies, even denying the Lord that bought them, and bring upon themselves swift destruction. And many shall follow their pernicious ways; by reason of whom the way of truth shall be evil spoken of."  2 Pet 2:1-2


The dimensions of the mercy seat (2.5 cubits x 1.5 cubits) is based on the same ratio as the numerical values of "Christ" and "Jesus".


The mercy seat was originally commanded of Moses by God (Exodus 25:17-22) and placed above the Ark of the Covenant. The Ark and the Mercy Seat were carried by the Israelites throughout their forty-year sojourn in the desert. When Israel settled in the Promised Land, and Solomon’s Temple was built in Jerusalem, the Ark and the Mercy Seat were placed in the Holy of Holies in the Temple. Two cherubims of gold were on either end of the mercy seat. (Exo 37:7-8)

"The LORD reigneth; let the people tremble: he sitteth between the cherubims; let the earth be moved." Psa 99:1


The Prophecy of Dante was written by Lord Byron at Ravenna in the year 1819. It's closing words (Canto the Fourth, 150-154) speak of the truthful words of the prophets being ignored in the end times, as they had been in the old times:

﻿﻿"﻿﻿Beholding with the dark eye of a Seer
The evil days to gifted souls foreshown,
Foretelling them to those who will not hear;
As in the old time, till the hour be come
When Truth shall strike their eyes through many a tear,
And make them own the Prophet in his tomb."

Earlier in the poem (Canto the First, 61-64), Lord Byron had referenced scripture concerning the futility of the prophet's warnings. Compare:
﻿﻿"Like that Jerusalem which the Almighty He
Wept over, "but thou wouldst not;" as the bird
Gathers its young, I would have gathered thee
Beneath a parent pinion, hadst thou heard  My voice"﻿﻿

﻿﻿"O Jerusalem, Jerusalem, thou that killest the prophets, and stonest them which are sent unto thee, how often would I have gathered thy children together, even as a hen gathereth her chickens under her wings, and ye would not!" ﻿﻿ Mat 23:37 (also see Luk 13:34)
With apologies to the original composer, and in the spirit of Kohelet:
Row, row, row your boat,
Gently down the stream.
Verily, verily, verily, verily,
Life is but a dream.