The Ten Sons of Haman

"And the king said unto Esther the queen, The Jews have slain and destroyed five hundred men in Shushan the palace, and the ten sons of Haman; what have they done in the rest of the king's provinces? now what is thy petition? and it shall be granted thee: or what is thy request further? and it shall be done. Then said Esther, If it please the king, let it be granted to the Jews which are in Shushan to do to morrow also according unto this day's decree, and let Haman's ten sons be hanged upon the gallows."  Est 9:12-13

With the unfolding of world history and a close examination of the text, the true meaning of this difficult passage has come to light. As explained by the sages:

Kepler's third law was subsequently improved upon by Isaac Newton, who discovered that the equation had also to take into account the size (or more correctly mass) of the planets. Kepler's elegant equation A³ / P² (where A is the length of the semi-major axis and P the period of orbit) still works exceptionally well for the smaller planets of the solar system, as can be seen from the following table:

Kepler's third law as it applies to the planets. The relatively small planets of the inner solar system are perfectly harmonious, just as Kepler theorized.
It's worth reminding ourselves of the scale of things - these correctly scaled models show the relative sizes of the planets. The mass of Jupiter is 318 times that of the Earth, and 2.5 times the mass of all the other planets combined.
Although exaggerated in drawings, the Earth's orbit is actually only slightly elliptical, barely detectable from a perfect circle. Whereas a circle has an eccentricity of zero, the Earth's orbit is only slightly more eccentric at 0.01671123. What this means is that as our planet hurtles along it's orbital path (at a cool 108,000 km/hr) it's distance from the Sun is constantly changing, varying by as much as 1.67% more or less from the average, as indicated by the degree of eccentricity.


The first accurate calculation of the distance from the Earth to the Sun was made during the transits of Venus across the Sun in 1761 and 1769. 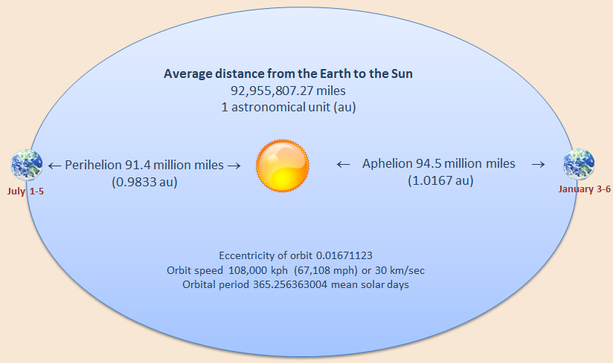 The Earth's orbit around the Sun, using a greatly exaggerated eccentricity for effect.
Each timestamp has a different proximity to the Sun, with a variation of about 0.2 miles per second, or 17,200 miles per day. Unlike Kepler, we now have the luxury of astronomical software that enables us to know the precise distance from the Sun to any geographical location on Earth for any given time from the past, present or future. What this knowledge reveals makes Kepler's introduction to Harmonices Mundi appear prescient, and entrenches the accuracy of the prophesy from the Book of Esther.

Kepler's Third Is A Perfect Six

Using a distance scale of millions of miles, Kepler's Third Law applied to the planets of the inner solar system calculates to approximately 6. For the Earth, at an average distance of 1 astronomical unit (92.95580727 million miles) and an orbital period of 365.256363 days, the calculation for A³ / P² is therefore:


Given the Earth's orbital eccentricity of 0.1671123, this means the calculation varies between 5.94 and 6.10 depending on the time of year. We can therefore calculate precisely when Kepler's Law calculates to exactly 6, and so begin to unravel the mystery of the large letter vav in the Book of Esther. Using the scale of millions of miles is particularly poignant, considering there were six million Jews killed during the Holocaust. To calculate, we use the formula:

The Sun will be this distance from Jerusalem just before sunrise during Sukkot, 5778 on the Hebrew calendar (October 9th, 2017). 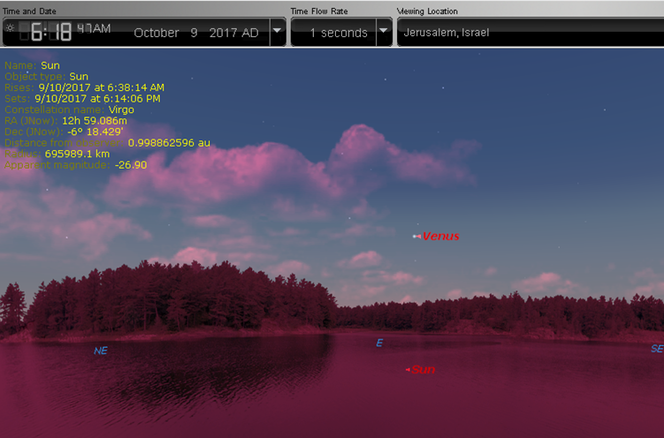 The position of the Sun for an observer in Jerusalem when, on a scale of millions of miles, Kepler's Law calculates to exactly 6. Starry Night Software.
In history, October 9th was an important date for both the outcome and the aftermath of World War II. On October 9th 1945, Pierre Laval, who as the premier of Vichy France had collaborated with the Nazi programs of oppression and genocide during World War II, was  sentenced by the French High Court to death for treason. This event was pivotal to the number 6 and the eventual fulfillment of Esther's prophesy regarding the hanging of the ten sons of Haman.


The High Court, which functioned until 1949, judged 108 cases, pronouncing eight death penalties, of which only three were carried out.


Also in the book of Ezra 5:5 is found the Aramaic word for God (אלההם) which has a gematria value of 81.

On October 9, 1941, one of the most important decisions in the course of  World War II was made by President Franklin D. Roosevelt in a small meeting with only Vice President Henry Wallace and the head of the National Defense Research Committee Vannevar Bush present.


Roosevelt committed the United States government to embark upon a program of intensified research into the feasibility of a fission bomb. The issue had first drawn the attention of President Roosevelt when Albert Einstein wrote the president a letter in August 1939 outlining his concerns that Germany might pursue such a weapon, and with it Hitler might become invincible. The United States was still technically a neutral nation in October 1941.

Another relationship to the astronomical unit can be derived from a Hebrew letter count from the Book of Esther. The text contains 12,196 Hebrew letters, plus four for the title (אסתר) giving a total of 12,200.

﻿"Now in the twelfth month, that is, the month Adar, on the thirteenth day of the same, when the king's commandment and his decree drew near to be put in execution, in the day that the enemies of the Jews hoped to have power over them, (though it was turned to the contrary, that the Jews had rule over them that hated them;)" ﻿ Est 9:1 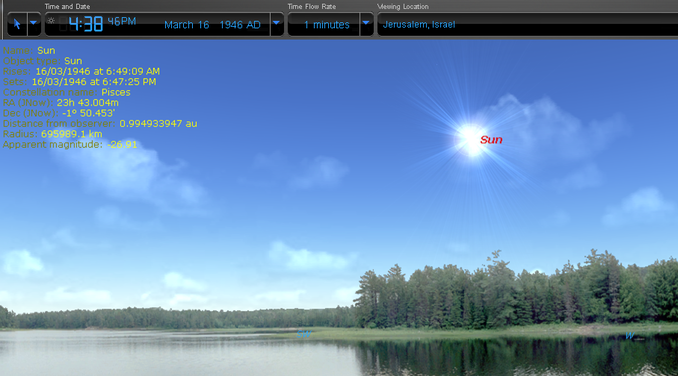 The Sun in the evening sky as seen from Jerusalem on Purim Eve, 1946. At that time, 7719 seconds before sunset, the distance between the Sun and Jerusalem was precisely 12,200² kilometers. Starry Night Software.
One of the ten Nazis hung at Nuremberg was Julius Streicher, who was obviously conversant with Jewish history and particularly the Book of Esther. Just before his execution, he shouted "Purim Fest 1946!". Purim was to commence at sunset, 2 hours 8 minutes and 39 seconds after the above screenshot. This is equivalent to 7719 seconds:


Using 12,196 as the letter count (without the title) can be used as the basis for another calculation:


The Sun was precisely this distance from Jerusalem on 11 Adar (March 14) 1946. Generally the Fast of Esther is observed on Purim Eve, unless Purim coincides with the Sabbath, as was the case in 1946. In which case the fast is brought forward to the Thursday, the 11th day of Adar. The Fast of Esther was to begin at sunrise on March 14, 1946. 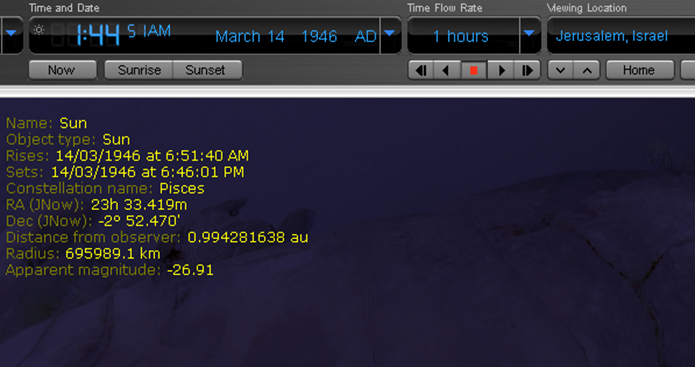 On 11 Adar, 1946 the Sun was precisely 12,196² kilometers from Jerusalem. Starry Night Software.
Of course the Sun is this distance from Jerusalem not once, but twice each year. The second time in 1946 occurred just after sunrise on October 25th. 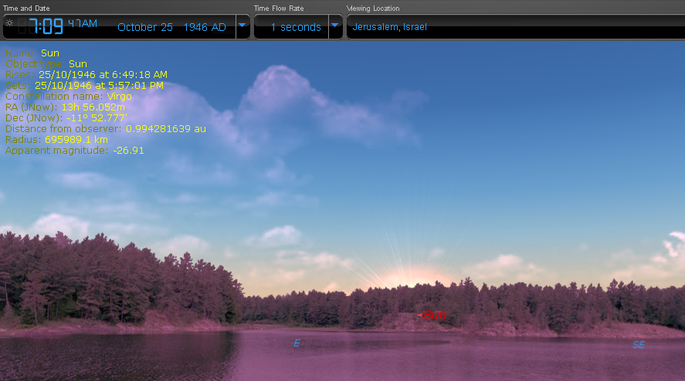 The Sun just after sunrise on October 25th, 1946. At this precise moment the Sun was 12,196² kilometers from Jerusalem. Starry Night Software.
Exactly one year earlier, on October 25th 1945, one of the Nuremberg accused, former chief of the German Labor Front Robert Ley escaped justice by commiting suicide. Ley was indignant at his arrest:

The Day of Atonement

In 1946, Yom Kippur began at sunset on Friday, 4th October until sunset on Saturday, 5th October. During this day, the Sun was precisely 1.0000 astronomical unit from Jerusalem. 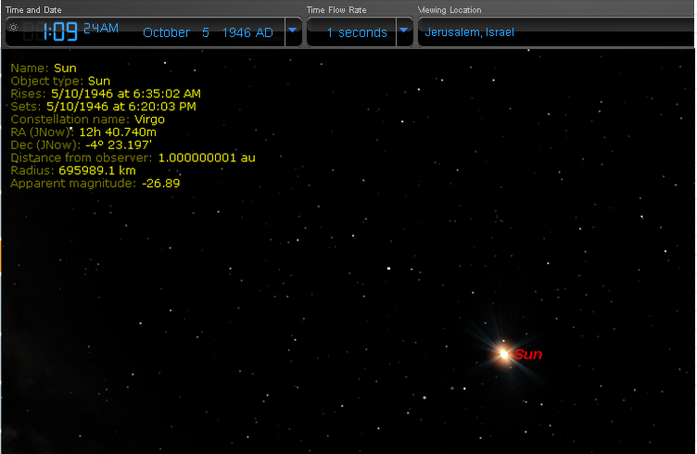 The position of the Sun on Yom Kippur, 1946 (with the horizon hidden) when it's distance from Jerusalem was exactly 1 astronomical unit. Starry Night Software.
Moses received the second set of Ten Commandments in the year 2449 on the Hebrew calendar, whilst Yom Kippur, 1946 coincided with the year 5707.


"Have an easy fast" is the proper way to wish someone well for Yom Kippur. Please don't wish people a Happy Yom Kippur; it's not a happy holiday.

In addition to the pivotal role of the number 6, you may have also noticed the consistent appearance of the number 108 and it's multiples throughout this study. To recap:


The radius of the Earth's core and the diameter of the moon are both 2,160 miles, so something's going on. Strangely, an excellent approximation of an astronomical unit can be obtained from the following calculations:


Using the precise diameter of the Sun provides another opportunity to explore the Esther phenomena:


The Sun was this precise distance from Jerusalem just after sunset on April 20, 1946. This coincided with 20 Nisan on the Hebrew calendar, the sixth day of Passover. 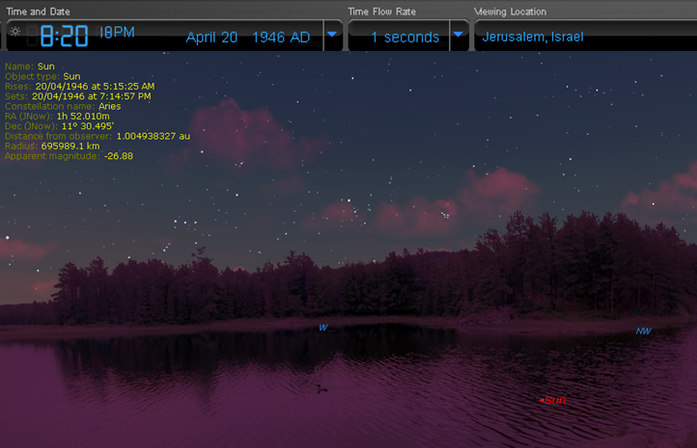 The position of the Sun on the sixth day of Passover, 1946 was the diameter of the Sun x 108 miles from Jerusalem. Starry Night Software.
This event occurred 1 hour 9 minutes and 18 seconds after sunrise, or 4158 seconds. In the Book of Judges (Chapter 6) Israel was reduced to utter misery by the Midianites.

"And the children of Israel did evil in the sight of the LORD: and the LORD delivered them into the hand of Midian seven years." Jdg 6:1

The Full Sun Has Risen

Kepler's first two laws of planetary motion were formulated in Prague, where Kepler was able to work for Tycho Brahe and therefore gain access to his master's extensive astronomical data. In 1611 (the same year the King James Version of the Bible was released), the growing political-religious tension in Prague forced Emperor Rudolph to abdicate as King of Bohemia, to be succeeded by by his brother Matthias. It was clear that Kepler's future prospects in the court of Matthias were dim, so Kepler moved to Linz in Austria from where his third planetary law was born. In a strange twist, 137 years later (in 1748) Jews were only permitted to remain in Bohemia on payment of a "Judensteuer" of 216,000 florins. (Judaism in Action, Chapter 6, p. 310).

In Harmonices Mundi, Kepler does not give any details about how he derived his formula, but he does provide the date of his epiphany (March 8, 1618). On this date, the relationship between the Book of Esther and Kepler's Third Law of planetary motion was described in the heavens when just after sunrise, the Sun was 12,196² kilometers (0.994281637 au) for observers (including Kepler) in Linz, Austria. 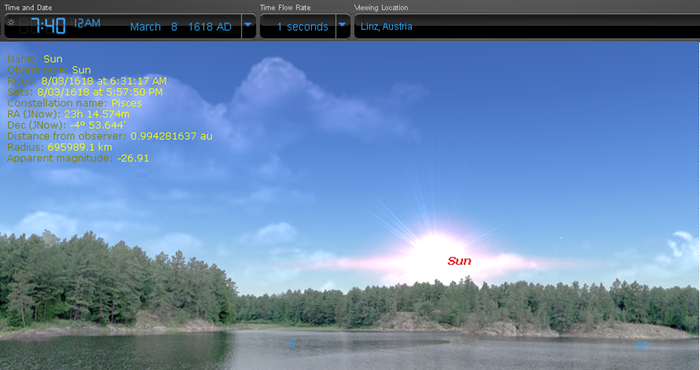 ....the full sun of the most highly remarkable spectacle has risen — nothing holds me back...."  Johannes Kepler. Introduction, Harmonices Mundi.