There is a plethora of information on the golden ratio and where it can be observed, including these two short introductory videos:

Given the ubiquitous nature of the golden ratio in all of creation, it behooves one to seek it in the words of the Creator, the holy Bible.

The Knowledge of Good and Evil

A cousin of the Fibonacci numbers is a sequence obtained by a similar technique, but beginning with the numbers 2, 1, 3, 4, 7... etc. Numbers in this series are called Lucas numbers (named after another mathematician) which also display interesting properties.


When God drove out the man from the Garden of Eden, he placed Cherubims and a flaming sword to keep the way of the tree of life. 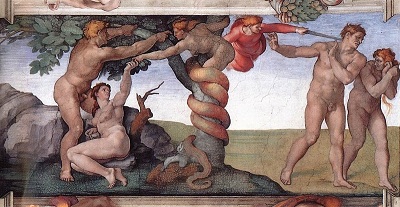 The Fall of Man and the Expulsion from the Garden of Eden by Michaelangelo. Fresco, ceiling. Sistine Chapel, Vatican. 1508 - 1512 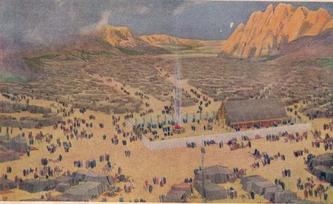 Israel Encamped Roundabout the Tabernacle in the Wilderness of Sinai John W. Kelchner
In the Bible, the Tabernacle was the portable dwelling place for the divine presence from the time of the Exodus from Egypt until the conquering of the land of Canaan. Built according to specifications revealed by God to Moses at Mount Sinai, it was transported  by the Israelites on their journey through the wilderness and into the Promised Land. It was replaced as the dwelling place of God by the First Temple in Jerusalem. Within the Tabernacle was a shrine (the Holy of Holies) and the Ark of the Covenant. Inside the Tabernacle, the Lord talked with Moses, and the children of Israel encamped round about.

In the book of Numbers, God appointed the Levites to perform guard duties concerning the Tabernacle and it's contents, to protect the Israelites from the consequences of encroachment. The golden ratio of 5778 is used to pinpoint the verse relating to this sacred duty:

"My tabernacle is spoiled, and all my cords are broken: my children are gone forth of me, and they are not: there is none to stretch forth my tent any more, and to set up my curtains." Jer 10:20 (verse number 19,022 in the Bible)
אהלי  שדד  וכל  מיתרי  נתקו  בני  יצאני  ואינם  אין  נטה  עוד  אהלי  ומקים  יריעותי

The words "tabernacle" and "tent" are alternative translations of the same Hebrew word (﻿﻿אהל﻿﻿) Strong's H168.

The gematria of Jer 22:29 is 1525, a value shared with two affirmative verses from the book of Psalms: 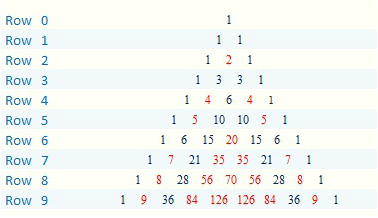 The first ten rows of Pascas's triangle. The sides are all "1's". All the other numbers are the sum of the two numbers above.
In the illustration, numbers that are not triangular are colored red. You can see patterns beginning to emerge (triangles within triangles. The notation for binomial numbers is based on a simple address matrix, according to row and column numbers (both starting with zero). For example, the number 20 is located at row 6, column 3. It's notation is therefore written as C(6,3) or ₆C₃ (C is for coefficient), whilst number 28 is written as C(8,2).

In the Jewish tradition, Adam and and Eve were created on the 1st day of Tishrei (Rosh Hashanah). The first day of creation was six days earlier on 25th Elul. On the second day, God divided the waters from the waters, vapour above, water below Gen 1:6-8), and on the third day, He created land and sea (Gen 1:9-10). Then on the fifth day, God created animal life, including the sea creatures (Gen 1:20-23).

God moves in a mysterious way
His wonders to perform;
He plants His footsteps in the sea
And rides upon the storm.
William Cowper (1773)
On a much smaller scale, the cross section of the Nautilus shell is probably the most precise and elegant expression of the golden spiral in all of nature, as evidenced in the images below. The chambered Nautilus is an odd yet beautiful creature that's been swimming in the sea for half a billion years without evolving much in all that time.
Sadly, this beautiful creature may be headed for extinction, according to marine biologists. They are being fished out, due to their increasing popularity in the worldwide jewelry trade. There is great demand for its delicate shell with near-perfect spirals when cut in cross-section. Download a video of the Nautilus here, before it's too late (5.2 Mb).

Thanks for the heavenly message brought by thee,
Child of the wandering sea.
From "The Chambered Nautilus" by Oliver Wendell Holmes (1809-1894)

The Golden Ratio (Phi) in Pi

Oftentimes the most significant gematria in the Bible is punctuated with repdigits. Consider the Bible's famous first verse, for example. In this verse, consisting of seven Hebrew words, repdigits are abundantly evident:

Remembering that Hebrew is read from right to left:


All 3 digit repdigits are divisible by 37, as also is the total gematria of this verse (2701 = 37 x 73). This repdigit design is also evident 13 verses later, when God said "Let there be lights in the firmament of heaven" (יהי מארת ברקיע השמים).


Remarkably, in a search for the golden ratio in pi, the results were similarly punctuated with repdigits. The first occurrence of the 8-digit string 16180339 begins at position 19,445,230 (after the decimal point) in pi.

There are two occurrences of 16180339 in the first 100 million digits of pi. The second occurrence begins at position 21118044 after the decimal point. This number not only includes repdigit 111, but also the gematria value of the Shema (Deu 6:4). Shema (שמע) is the Hebrew word that begins the most important prayer in Judaism.

"And for that the dream was doubled unto Pharaoh twice; it is because the thing is established by God, and God will shortly bring it to pass."  Gen 41:32 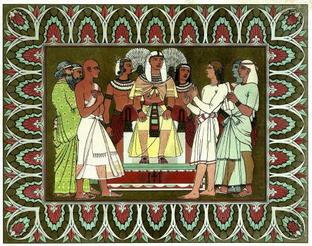 Pharaoh's Dream. Illustration by Owen Jones from "The History of Joseph and His Brethren" (Day & Son, 1869).
The repdigit coincidences continue:


Benjamin was the last born of Jacob's twelve sons, and the only founder of a tribe to be born in Israel. Benjamin was born on 11 Cheshvan, 2208 on the Hebrew calendar, and also died on 11th Cheshvan, 111 years later.


The last biblical mention of Benjamin is in Rev 7:8, where "of the tribe of Benjamin" (εκ φυλης βενιαμιν) has an isopsephia value of 1331.

The first appearance of the four digit string 2368 (Jesus Christ) begins at position 7481 after the decimal point in pi.

Beginning at position 2368 after the decimal point in pi is the four digit string 3534.