The Greek system of numbering letters of the alphabet, called isopsephy, predates and is based on a similar method to Hebrew gematria. The Greek alphabet, along with the numerical equivalent, are outlined in the following table. Note that two letters (digamma and koppa) have fallen into disuse. Digamma, later called Stigma, continued in use as a numerical symbol, as seen in the 666 of Revelation 13:18. The isopsephia values of  Ιησους (Iesous, translated as "Jesus"), and Χριστος (Christos, translated as "Christ") are also shown. 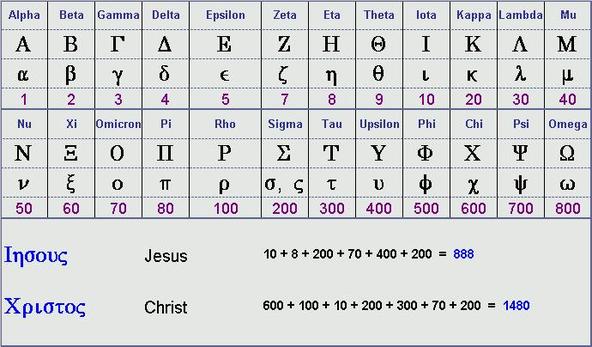 The letters of the Greek alphabet and their isopsephia values.

"For unto us a child is born, unto us a son is given: and the government shall be upon his shoulder: and his name shall be called Wonderful, Counsellor, The mighty God, The everlasting Father, The Prince of Peace." Isa 9:6

The remarkable gematria of this verse is found by adding the value of every seventh Hebrew letter, thus: (remember Hebrew is read from right to left).

Using the same method of adding the value of every seventh Hebrew letter, achieves the same remarkable testimony of Jesus!

Isaiah 11:1-3a - every seventh Hebrew letter again sums to Jesus.

The gematria values of Jesus (888) and Christ (1480) provide evidence that Jesus is indeed the Messiah. We have already seen that these two numbers are both divisible by 37 (see the significance of that in the study of Genesis 1:1, but consider this:


"And thou shalt make a mercy seat of pure gold: two cubits and a half shall be the length thereof, and a cubit and a half the breadth thereof."  Exo 25:17


According to this website, the ratio of Solomon's Temple to Moses' Tabernacle is 2.2222… The details are:

Ratio of Solomon's Temple to Moses' Tabernacle
The mystery of 666 deepens.

"Here is wisdom. Let him that hath understanding count the number of the beast: for it is the number of a man; and his number is Six hundred threescore and six." Rev 13:18

The very next verse from the Book of Revelation also quotes a number :

"And I looked, and, lo, a Lamb stood on the mount Sion, and with him an hundred forty and four thousand, having his Father's name written in their foreheads." Rev 14:1

Although the majority of the gematria cited is based on the original Hebrew and Greek texts, there is ample evidence that the King James translation is also an inspired work. The word and letter count of the first and last verses from the KJV, and their relation to 1 John 5:7 is one example. This verse is disputed by biblical scholars, and is generally agreed not to have been part of John's original letter. The evidence suggests that the words were inserted into Greek texts from Latin in the late Middle Ages. Some Bible translations, such as the New International Version and recent editions of the Greek NT, omit the words in brackets:

"For there are three that bear record in heaven, (the Father, the Word, and the Holy Ghost: and these three are one.)"  1 John 5:7

The connection between 1 John 5:7 and the Alpha and Omega is amazing. The first and last verses in the King James Bible total 22 words and 88 letters, which is the same word and letter counts in the Greek texts of 1 John 5:7

Whether this can be counted as a proof text, or evidence of deliberate manipulation, is debatable. If it's the latter, then the question remains, who were the manipulators? The Latin scribes of the late Middle Ages, the compilors of the King James Version, or was there a divine guiding hand? 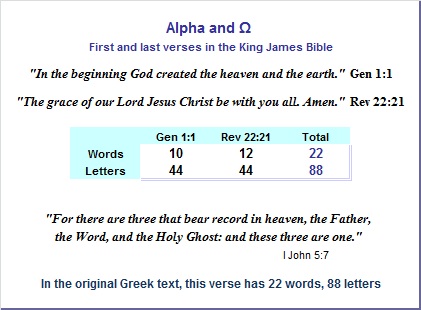 The Son of David

The Shema (Deu 6:4) is Judaism's most important prayer, traditionally recited twice daily. Jesus confirmed it as "the first of all commandments" (Mar 12:29). The term יהוה אחד (one LORD) has a gematria value of 39, and the verse following the Shema has 39 Hebrew letters. It begins ואהבת את יהוה אלהיך ("And thou shalt love the LORD thy God...") which has a gematria value of 907.

8817 is the isopsephia value of two verses relating to the Messiah:


The first occurrence of 360 in pi is followed by the three digits 726:

The term "Of a truth this is the Prophet" (αληθως ο προφητης) has an isopsephia value of 3989.

This first occurrence of 424 begins from position 1109.


Remarkably, the first occurrence of 186 in pi begins from position 424: